Early in the sales process, people often ask us what authority they can expect from the links we generate. That’s a fair question, but I think what they should ask instead is what the *quality* is of the links that we generate.

Believe it or not, there’s a difference between the Domain Authority/Domain Rating of a link and the quality of a link that many SEOs get wrong. In this video, I break down the difference and why you should move towards quality instead.

You want CNN. You want Forbes. You want CNET. You want those links to your site, but herein lies the rub with this thing. In general, not always does that strategically makes sense for the semantic fit of your business. Not every business has truly a large number of high authority links available to them.

The reason for that is that there are certain linkable audiences on the web that reinforce one another. So, in certain markets, there are more high authority links on average, and in others, there are less. And why this matters is yes, it is still good to get a link occasionally from CNN, from CNET, what have you, but that’s not scale.

You can get those occasionally no matter what market you’re in, but you want not one or two links that do that – yes, those are still great, but what you want is a scalable strategy that can be replicable over time. So what I mean specifically as an example of this, is that lifestyle businesses as a vertical tend to have a lot of lower DA links.

So, if you look at a lifestyle site on average, there tends to be more mommy bloggers, things like that, where they’re not as authoritative on average. This means the average site doesn’t have the same link authority as other markets, like technology. So, as an example of this in action, if we pull up Hallmark’s Domain Authority spread, you’ll see they have a huge percentage of links on the lower DA side.

This makes sense. This doesn’t mean they’re low quality, it just means, semantically, their audience skews on the lower end. So, at scale, these will have the impacts that matter, that work. Yes, you probably still would want one 90 DA site, but you’re sticking a square peg in a round hole by trying to semantically fit a strategy of surveys, what have you, into Hallmark.

That’s not where the audience hangs out online. Therefore, you’ll likely have less success, a much higher cost per link in approaching that with them. And on the other side of that is actually the business and tech sector. So, if we look at a site like CreditCards.com, you can see the comparison in the spread between these two sites. 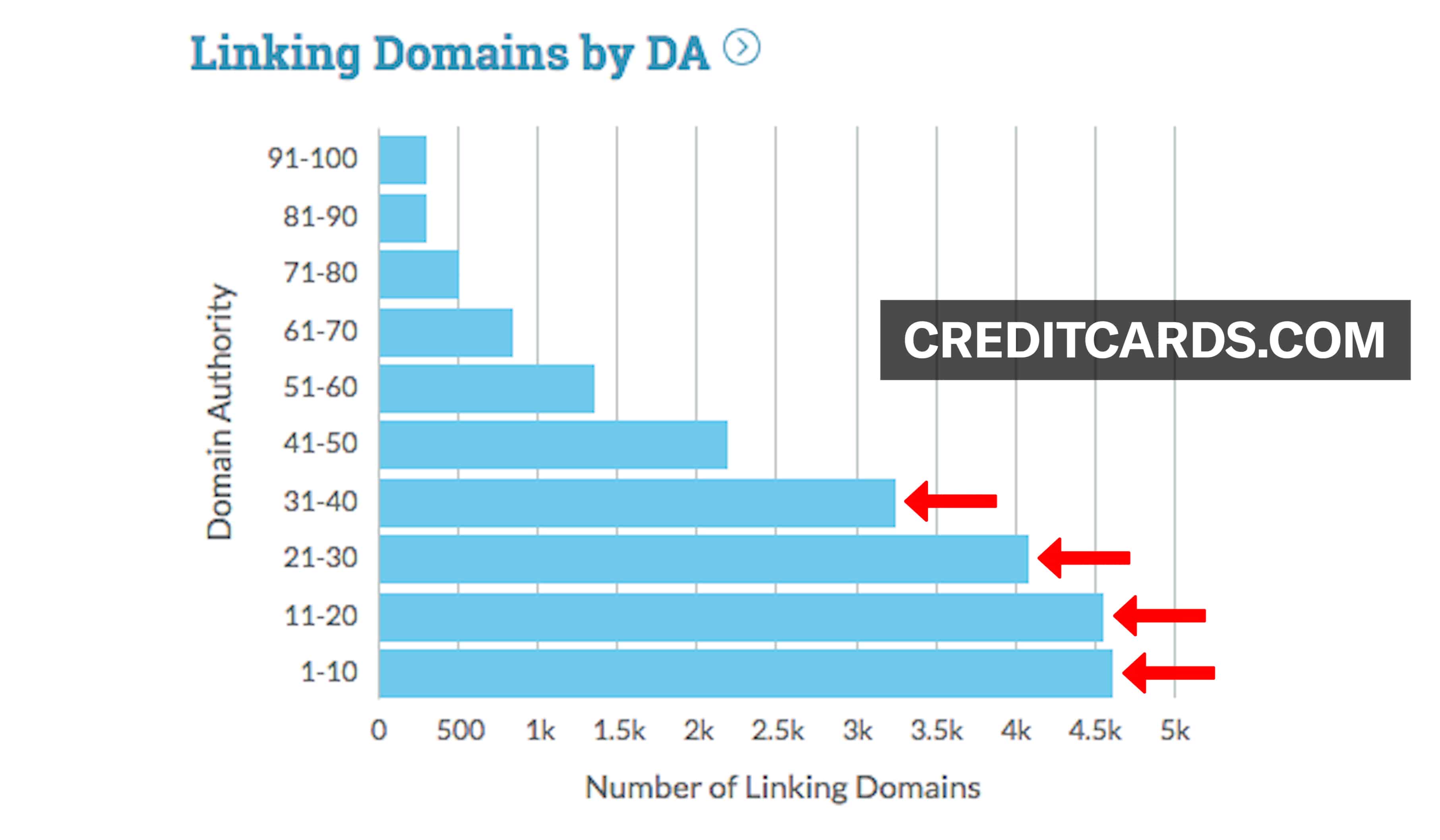 That doesn’t mean Hallmark is doing a bad job. It means that CreditCard.com’s audience on average is just more tech savvy, therefore, linking to each other at a higher velocity, which in turn creates a larger spread of sites in 10, to 30, to 40 range for that kind of business. And on average, that is skewing the link Domain Authority average higher for that business because that’s where it hangs out.

And why this matters, we, as a strategic content marketing agency, we fit the strategy to the audience. For a site like Hallmark, their audience is very frequently mommy bloggers. That’s where their qualified buyers are for a huge percentage of that work. And because of that, you’re going to get a decent spread of lower authority links.

That doesn’t mean they’re low quality, they’re just low authority. There’s a difference. A spammy network site, that’s low quality. An actual active blogger who updates regularly and is actually interested in sharing with their friends and might have a solid authority base, that is low authority, yes, but it’s not low quality. That is audience targeting for that business.

And if you compare it to CreditCards.com, it’s a higher authority in general. So, therefore, these comparisons, for a site like Hallmark, we would average a much lower DA for them if actively link building. It’s not going to be 1 to 10 on average, but it’s going to be lower than a site like CreditCards.com because of the difference in audience.

That doesn’t mean we’re any worse at what we do, it’s just what the audience fit is for that business. So we have clients where we average around a DA 30 for them, and then we have other clients where we average a DA 50. And I don’t think we’re doing a poor job for the DA 30, their growth is still massive on average because we’re finding their audience online, generating links at scale, and those links are topically relevant.

So, hopefully, this thought process gets you thinking a little bit deeper about Domain Authority in your link acquistion strategy. It doesn’t mean don’t get them. It’s more like how can we strategically think about our link acquisition strategy that maps to our audience online.

And, yes, sometimes, that audience is lower on average. And if you think about that and you think about authority while still thinking about quality and then being okay with lower authority as long as the quality is good because it’s topical, growing in value and your audience is there, you’ll be successful, and I guarantee you’ll see growth and a lot more scale from that effort as well, because that’s credible, that’s where your audience hangs out online.

Hopefully you found this useful. If you’re still wondering where to find this data, you can locate the DA spread of your industry by looking at competitors on the bottom of Moz’s Link Explorer overview page.

How to Optimize for Voice Search w/ CNN’s Upasna Gautam

How to do Keyword Research in 2020 w/ Nick Eubanks